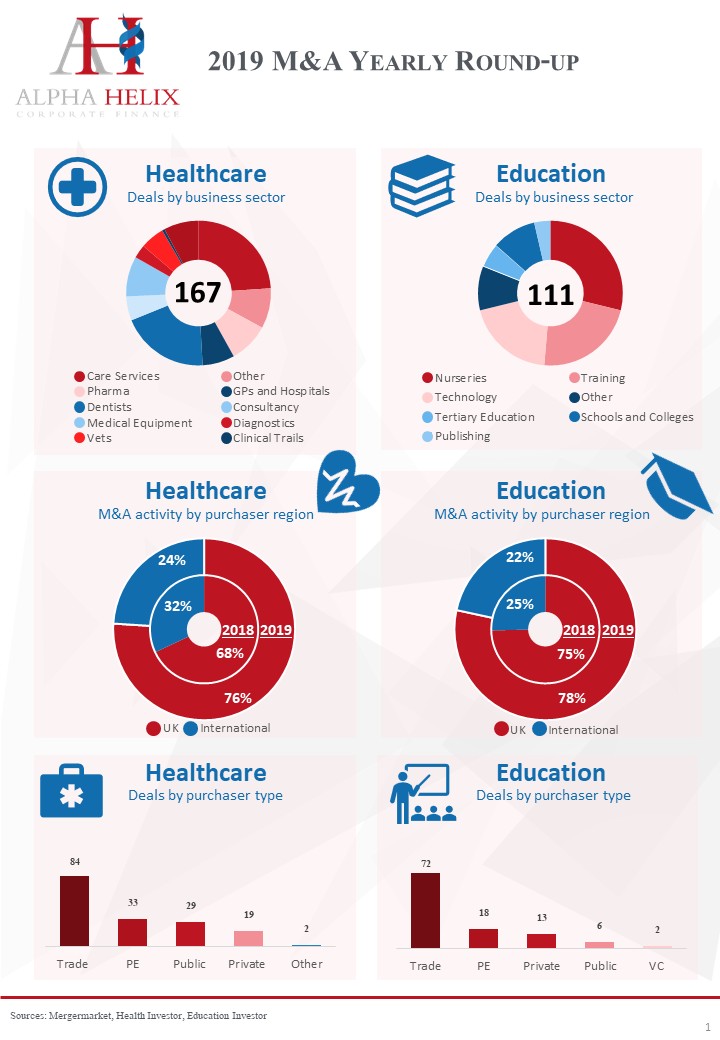 Consolidation was a key theme in the UK healthcare space, particularly in care services such as specialist and elderly care, as well as dental care. According to Alpha Helix (AH) research, M&A activity in the healthcare sector increased to 169 deals in 2019 from 165 deals in 2018.

2019 saw a greater focus in the care services space. REITs showed particular interest in this space with 8 deals between them in 2019. One of the most considerable transactions in care services was H/2 Capital Partners’ acquisition of Four Seasons, one of Britain's largest care home providers. Four Seasons employs c. 22,000 people for 329 care homes around the UK. The NHS would have viewed this transaction positively, given the fear that this large debt laden provider would fall into the recurring theme of poor service quality from care homes in the UK in 2019.

Dentistry saw substantial growth in M&A activity in 2019. The highly resilient sector, with limited exposure to cyclicality and a strong record of growth has continued to appeal to investors. The market is still seen to be fragmented and it is expected that consolidation will continue in this sector in 2020. Christie and Co estimates that there are now over 400 practice owners with more than two sites, indicating the high demand for dental practices in the UK.

Bupa Dental Care, with its now c.500 sites around the UK, has done a considerable portion of the shopping in the dental practice market in 2019. Other parties with significant activity include August Equity-backed Dental Partners and Riverdale Healthcare.

M&A activity in the medical equipment manufacturing/distribution vertical has tailed off in 2019. This may be owing to investor uncertainty surrounding Brexit and the relationship the UK adopts towards the EU. The UK no longer holding ties with the European Free Trade Association could produce adverse effects on the import and export markets for medical equipment.

According to AH research, the percentage of international investors in the UK healthcare market has dropped by almost 10% in 2019, possibly, due to uncertainty surrounding Brexit. In 2018 it was estimated that around 12% of the 1.9m employees in healthcare in the UK were non-British nationals. The UK’s heavy reliance on skilled workers from the European Economic Area (EEA) in the healthcare sector and uncertainty surrounding the UK’s position on Brexit is and will be an area of concern for potential investors.

Trade buyers have made up a sizable portion of purchasers in the healthcare market in 2019. 58% of the trade purchases that have been made were in the care services and dentistry sub-sectors emphasizing the consolidation that is taking place in those fragmented sub-sectors.

AH research recorded 111 M&A transactions in 2019, a substantial increase on the 71 transactions recorded in 2018. The increase can largely be attributed to the growth in Nursery M&A activity in 2019, with the training and technology sub-sectors also showing high levels of growth as per AH research. Activity in the schools/colleges and other sub-sectors decreased slightly in 2019 as investor attention shifted to the fragmented, higher growth sub-sectors.

With 32 transactions in the 2019 year, nurseries attracted the most M&A activity. Busy Bees, which operates over 360 sites across the UK and has over 35 years experience in the sector, picked up where they left off in 2018 with a further 4 transactions in 2019. Just Childcare, the 65-year-old childcare provider, made 3 acquisitions in 2019 to add to the 33 nurseries it ran at the end of 2018. 25 different purchasers identified by AH research in 2019 indicates the extent of how fragmented the nursery sector remains in the UK. Christie and Co’s Childcare Business Outlook for 2019 estimated that 80% of nursery settings were independently operated indicating that the nursery sector theme of consolidation will continue into 2020.

Laing Busson reported that the average number of settings per nursery was c.44 in the UK. The age of the traditional independently run lower setting nurseries is under threat with larger trade players building nurseries with a capacity many multiples higher than that of their traditional counterparts. The Early Learning Village at Lorong Chuan is greater that 50,000 square meters and has capacity for c.2,100 children which could be indicative of the future of nurseries in large urban areas.

Schools and colleges continue to see less interest from investors. The UK Department of Education recorded a total of 8.8m pupils across independent and state schools in 2019. This number has increased consistently over the last 10 years; however, the annual growth rate of pupils over this period has been less than 1%. The absence of real growth in one of the key industry drivers justifies investors’ reluctance to show greater interest in the sub-sector.

AH research indicates significant growth in the training and edtech verticals. Education Technology Magazine forecasted the industry to reach £3.4bn by 2021, growing at 22% year on year. This forecasted growth is being emphasized through the high level of deal activity in the edtech space. New innovations in digital education, and credentialing have also helped to drive M&A activity in the space. Online and digital training companies have provided attractive acquisition candidates for private equity and larger public companies which are able to borrow at more attractive rates.

According to AH research, 2019 has seen a slight increase in M&A activity in the UK from local investors. In 2019, 1 in every 5 deals was from an international investor as opposed to 1 in every 4 deals in 2018. AH research indicating that there were 41 more deals in 2019 than 2018 and only 6 more deals made by international investors. The primary reason for this is the consolidation of the nursery sub-sector by UK domestic buyers which accounted for 30 out of the 32 transactions.

AH research indicates that trade buyers made up a significant portion of M&A activity in the UK Education industry. Trade buyers were especially prevalent in the nurseries sub-sector accounting for 88% of all buyers in this sector. 11 of the investments made by private equity firms were made in the technology and training sectors showing the attractiveness of these high growth verticals to private equity firms.